The Trick To Keeping House Spiders Out Of Your Boston Home

They might not be as annoying as other pests, but house spiders can still cause stress and discomfort for homeowners. Despite posing no real danger to humans, these common arachnids still manage to elicit fear wherever they’re found. House spiders can be beneficial to have around, but nobody wants to live in a house full of webs and eight-legged roommates. So, if you’re looking for the trick to keeping house spiders out of your Boston home, keep reading. 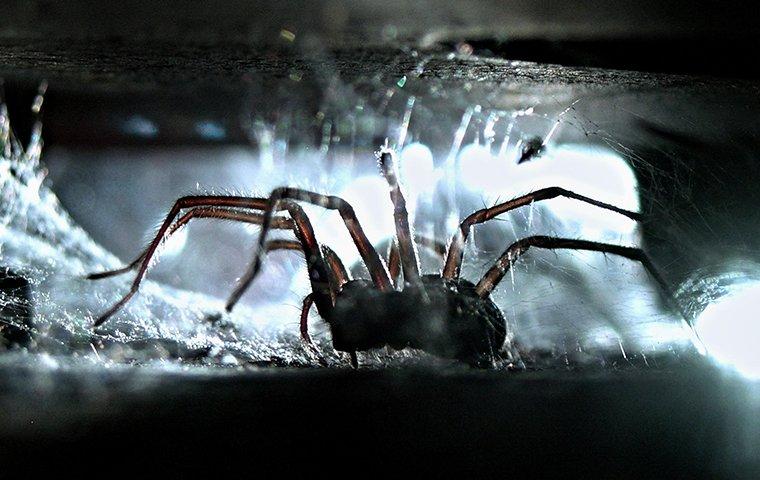 What Are House Spiders?

There are many species that are referred to as house spiders, but the common house spider (or American house spider) is the most frequently encountered in homes around Boston and the continental United States. These spiders average about 3/16 to 5/16 inch in size. They are typically brown in color with dark stripes on their legs and sometimes have splashes of white color on the abdomen.

While some species of home-dwelling spiders like the black widow and brown recluse are famous for their powerful venomous bite, you don’t have to worry about going to the hospital because of a house spider bite. It’s unlikely that a house spider will bite you in the first place, and if for some reason you are bitten, their venom isn’t strong enough to hurt you. Almost all spiders are venomous and have piercing fangs, but few are actually a threat to humans.

Where Do House Spiders Live?

As their name suggests, house spiders prefer to live indoors. Their webs can be found in corners of basements, attics, sheds, closets, or any dark and dingy area where they won’t be disturbed. However, house spiders are also known to build their webs outdoors around windows and under eaves where light attracts prey.

You might notice the presence of their empty webs before you ever see a house spider in the flesh. To catch prey, house spiders will build a nest in a given location. If they aren’t successful in trapping some unlucky bugs in a lone location, they will abandon the web and spin a new one at another location.

If there is abundant prey in your home, multiple house spiders may share a single location. As long as they don’t need to compete for food, they are content with coexisting in the same space. However, if you are actually seeing multiple house spiders on your property, it’s likely that the problem has been growing for a long time.

Keeping House Spiders Out Of Your Home

Tackling a spider infestation head-on isn’t fun. The best thing you can do to deal with an infestation of spiders is to keep them out:

Getting rid of spiders isn’t easy. If you need help eliminating house spiders and the pests they feed on, get in touch with the professionals at Urbanex. Our comprehensive pest control plans are designed to be safe and effective, getting rid of pests like house spiders and keeping them out for good. We’re always ready to assist with your pest problems. Contact us today for your free inspection.