Home › Blog › The Dangers Of Fire Ants On Your Knoxville Property

The Dangers Of Fire Ants On Your Knoxville Property

Pests often have names that perfectly reflect their nature. Pantry moths are found snacking on food in the pantry, yellowjackets have their distinctive yellow coloration, and fire ants deliver a burning sting that feels like pure fire. Fire ants can be harmful and incredibly frustrating to control. So, if you’ve been curious about the dangers of fire ants in Knoxville, here’s what you need to know. 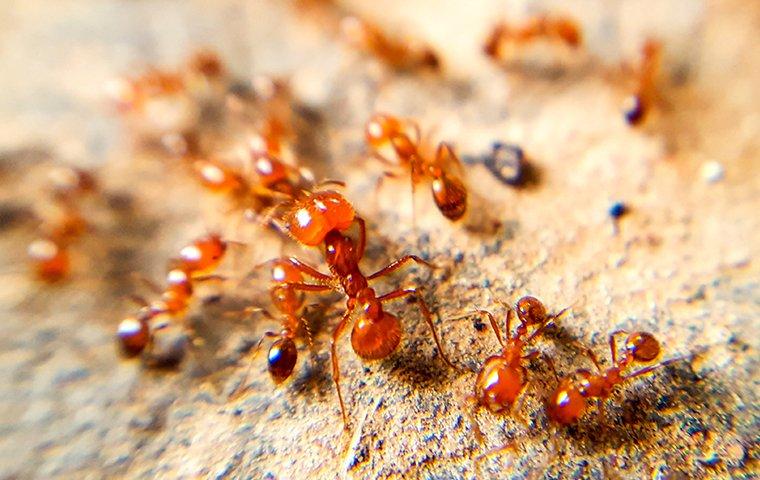 What Are Fire Ants?

Fire ants are a particularly aggressive type of ant found throughout much of the southern United States. They are also known as red imported fire ants, or RIFAs, for short. These ants were unintentionally brought from South America aboard trading vessels and have since taken over a massive range of territory.

Fire ants are reddish-brown in color and typically measure about ¼ inch in length. They are equipped with powerful jaws, but most notably, fire ants are also outfitted with a venomous stinger that can deliver a painful injection. They are highly territorial and will attack any trespassers on their turf.

As social insects, fire ants live in a colony with thousands of other members, each with their own designated role. But unlike certain other ants or bees, fire ant colonies often have multiple queens. Through a process called budding, a new queen will establish a satellite colony in the proximity of their original colony. This method allows fire ants to take over massive plots of land, sometimes exceeding an acre in size.

While they aren’t deadly, fire ants are somewhat dangerous. One fire ant can produce a painful sting on its own, but the trouble is that one sting is usually accompanied by many more. This can be especially dangerous for small children and pets who don’t know better than to disturb the aggressive ants.

Those will allergies are at particular risk of harm from fire ants. A series of fire ant stings to an allergic person can result in breathing difficulties and even anaphylactic shock. Though most fire ant stings can be treated with simple first aid, allergic individuals must seek medical attention immediately.

Why Can’t I Get Rid Of Fire Ants?

Fire ants are notoriously difficult to get rid of. Not only has evolution given these bugs a powerful defense mechanism in their fiery sting, but fire ants have also developed several strategies for dealing with threats to their colony.

When under attack, fire ants will disperse from the area and later recolonize at a nearby location. So, if you’re dumping hot water or cement down an ant mound, you may only be encouraging the colony to change its address.

Because fire ant colonies often have multiple queens, bait traps are not always effective. While one queen may be killed off, there are usually several other queens left alive to propagate the colony.

Fire ants have even been observed latching themselves together in a living raft to float over rising water in the event of floods. These tiny pests are determined to survive and can be practically impossible to eliminate without professional help.

The good news is that the experts at Urbanex are ready to solve your fire ant problems for good. Fire ants don’t discriminate between homes and businesses, so we offer both residential pest control plans and commercial pest control plans to protect your property. With over 25 years of combined experience in the pest control industry, we strive to provide our customers with the best service possible and will tailor our services to meet your unique needs. So, if you’re suffering from fire ants in Knoxville, don’t wait another day. Get in touch with us and say goodbye to fire ants once and for all.