Home › Blog › All The Answers To Nashville's Scorpion Questions

All The Answers To Nashville's Scorpion Questions

The beautiful mountains of Nashville, Tennessee is not necessarily synonymous with scorpion habitat, but that’s just what our charming city has become in the last few decades. Scorpion species common to our area include:

These strange arachnids are some of the most mysterious and evasive creatures ever to walk through our landlocked, rocky state. Many homeowners have questions about scorpions, and about how they live, hide, and bite victims this far up in the United States. Urbanex is proud to have answers to Nashville residents’ most pressing questions. Read on to get answers about our scorpions' habitat, favorite foods, stings, and much more. 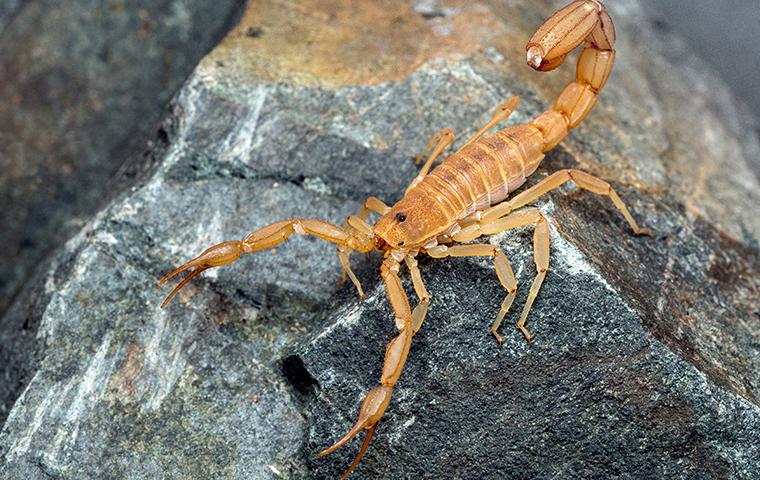 This can be a difficult question to answer both descriptively and biologically. Let’s begin by explaining what scorpions are not:

The word scorpion was translated from the Greek skorpios, which means ‘to cut.’ These arachnid family members are best identified by their long, curved backs, eight legs, and sharp, pointed stingers. These stingers can be up to ¼ inches long and can penetrate the skin of humans and pets alike.

"Where do scorpions live?"

Eastern Tennessee's Smoky Mountains are filled with scorpions of all shapes and sizes. The two most common species, the plain eastern stripeless scorpion and the striped scorpion can be found all the way in the Nashville, TN area.

Scorpions prefer to live in areas that are dark, moist, and undisturbed. You may find an odd species or two when flipping over rocks, wood, old cardboard, and flower pots. Some species of scorpion build burrows in which to hide and ambush prey. Others prefer to rest on vertical surfaces, such as the bark scorpion. In any case, these arachnids are difficult to find.

"What do scorpions eat?"

Scorpions prey on a wide variety of other insects, including grasshoppers, termites, spiders, beetles, and other stinging insects such as wasps. While they may act like pest control agents, scorpions often make for very inefficient DIY pest control.

"How poisonous is a scorpion?"

Here’s some good news and bad news. The bad news is that there are over 25 species of deadly scorpions in the world. The good news is that none of these species live in Nashville, TN. The Arizona bark scorpion is by far the most dangerous variety of scorpion in the United States, but these arachnids are rarely spotted this far up north. Scorpions that are venomous do have the potential to sting and kill human beings, however.

Scorpions do not bite, but they can sting. These stings often look like wasp or bee stings on human skin, with raised red bumps and puncture wounds in the centers. These bites may be dangerous to victims with certain allergies.

"What should you do if you encounter a scorpion?"

If you encounter a scorpion on your Nashville lawn, do the following:

"What do scorpions hate the most?"

Scorpions are not like people or pets in the sense that they can display nuanced emotions. However, we can take a guess about what these pests truly hate the most: Urbanex! In fact, the safest, most powerful, and most effective way to keep scorpions away from your Nashville yard is through professional assistance at Urbanex today. If you are interested in how our straightforward and fast-acting plans can best assist you, call Urbanex at our Nashville, TN office now!