Scorpion Identification Guide Across the Mid West and East Coast

Scorpions have a segmented body and a long segmented tail that curves up over its body. At the end of its tail is a venom-filled stinger. Scorpions also possess large claws which they use to catch their prey. Their prey is then paralyzed and subdued after being stung by the scorpion’s tail. 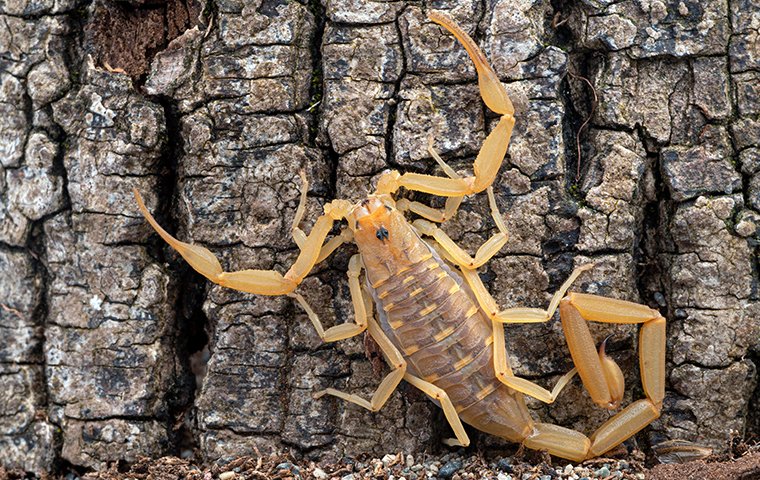 Despite having poor vision, scorpions are fierce predators and exceptional hunters. Another interesting fact about scorpions is they give birth to live young. After being born, the young climb onto the mother’s back until the first molt. Scorpions can survive for long periods without food by slowing down their metabolism, but they require a constant water source.

Scorpions are dangerous. While their stings are typically not life-threatening to healthy individuals, they certainly are painful. A scorpion sting can pose bigger problems in small children, the elderly, and those with a compromised immune system. A reaction from a scorpion sting ranges from mild (localized swelling) to severe (anaphylaxis). Avoiding contact with scorpions is important to your health and safety.

Why do I have a scorpion problem?

As predators, scorpions are on the constant search for prey. Scorpions prefer to live in areas with a lot of insect activity. Our yards often provide scorpions with fertile hunting grounds. Most yards have gardens, trees, shrubbery, trash containers, and compost, which provide areas of shelter and food for insects. The more insect activity you have, the more likely there will be scorpions and other predatory pests like spiders to hunt them.

Water is also a must for scorpions. Things like leaky pipes, air conditioning units, and poor drainage attract scorpions. To escape extreme heat, they will either burrow into the ground or move into our temperature-controlled homes.

Where will I find scorpions?

Active mainly at night, scorpions hide during the day in sheltered areas that retain moisture. Spaces under rocks and logs, behind tree bark, and under mulch in garden areas are some of their favorite hangouts.

If scorpions have moved inside while following their prey or to escape unsuitable weather conditions, they typically move to dark, quiet areas near moisture. Areas under sinks, within hanging clothes or folded towels, or in damp tubs or sinks are all places people may run into scorpions. Scorpions are also good climbers and are often found resting on both interior and exterior walls of a home or outbuilding.

Urbanex is the best choice to get rid of scorpions from your property. We offer our customers peace of mind knowing that problems with nuisance or dangerous pests will be solved and they won’t return. At Urbanex, we offer modern and effective pest control services that provide maximum results. To learn why so many home and business owners trust us with their pest control needs, reach out to us today!

How can I prevent scorpions in the future?

Prevent problems with scorpions with the help of the experts at Urbanex. In addition, use the following scorpion prevention tips: