Home › Blog › What You Should Know About Earwigs In Oklahoma City

What You Should Know About Earwigs In Oklahoma City

To many people, the earwig is an unsightly and somewhat intimidating little creature due to its tendency to creep up on you. With its prominent pincers, this nocturnal predator may seem menacing at first glance, but it's actually entirely harmless to humans. Even so, any insect can become a problem if enough of them infiltrate your Oklahoma City home. Whether you're just curious about the strange looking little creature crawling along on your carpet, or want to rid yourself of these creepy crawlies as soon as humanly possible, we've got all the information you need. In this post we'll outline their origins, habits, and how best to deal with them if they're giving you grief. 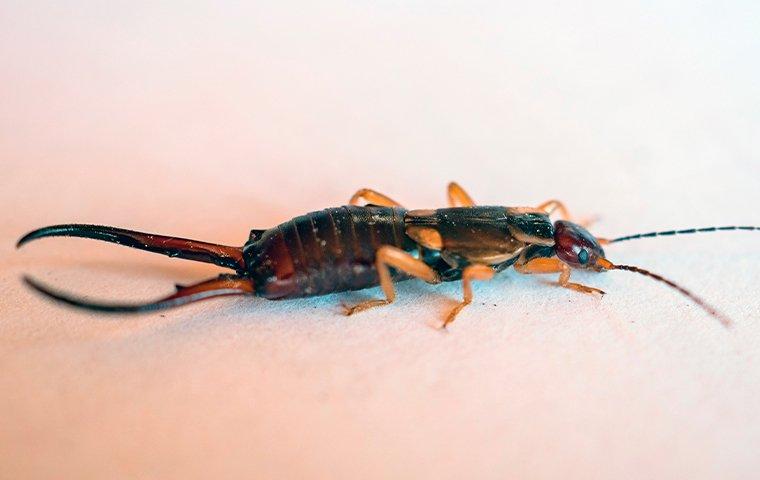 An old piece of European folklore is responsible for the widespread belief that earwigs want nothing more than to crawl into your ear and burrow into your brain while you sleep. Although they certainly look as though they may like to try that, in reality, they're not any more likely to seek refuge in your ear than any other insect. What a relief!

Not really, no. Their pincers can't even break the skin of most people. No venom involved, no diseases or parasites spread—not dangerous at all. Other than pinch you a bit, maybe startle you when you first see one, the most threatening thing that only some varieties can do is emit a foul odor when under stress. In their natural habitat outside, they mostly eat plant matter and small insects. Even when they invade homes, earwigs try to keep to themselves, darting away if disturbed. They're more of a threat to the garden than to you.

Why Are They In My Home?

Even though earwigs aren't actually dangerous, you still may not be thrilled to find yourself sharing space with them, especially if they're beginning to gather in substantial numbers. The key to keeping them out, as is the case with many insects, is to control the level of moisture in and around your home. Earwigs live in dark, damp areas out in the wild, such as under stumps and piles of leaves or mulch. Naturally, they're attracted to dark, humid areas. They make their way into homes through cracks in the exterior, swiftly seeking out the moist and seldom disturbed areas of the house. This includes closet spaces, under cabinets, in laundry rooms and bathrooms, and even under the covers of your bed.

How Do I Get Rid Of Them?

The first priority of any homeowner in regard to any pest, including earwigs, should always be prevention. Here's a quick bullet list of measures to take if you want to keep these and other insects out of your home.

These steps will ensure limited opportunity for moisture buildup, discouraging the sneaky bugs from settling in and multiplying on your property. However, the unfortunate truth is that no do-it-yourself solution will ever be one hundred percent effective.

Ultimately, the best way to secure yourself against any earwig infestation is to partner with a professional. If you're sick of finding these unsightly insects around your home, and putting up with them munching on your gardens, reach out to the experts at Urbanex for a comprehensive treatment plan.