Welcome to summer, Oklahoma City! At Urbanex, we’re hoping the season brings relaxing days in your sun-soaked garden and warm nights with the family. While summer is often the season we look to for fun in the sun, warm summer months are also when scorpions are most active.

Keep reading to find out what you need to know about these sneaky pests, and what you can do to prevent scorpions finding their way into your summer. 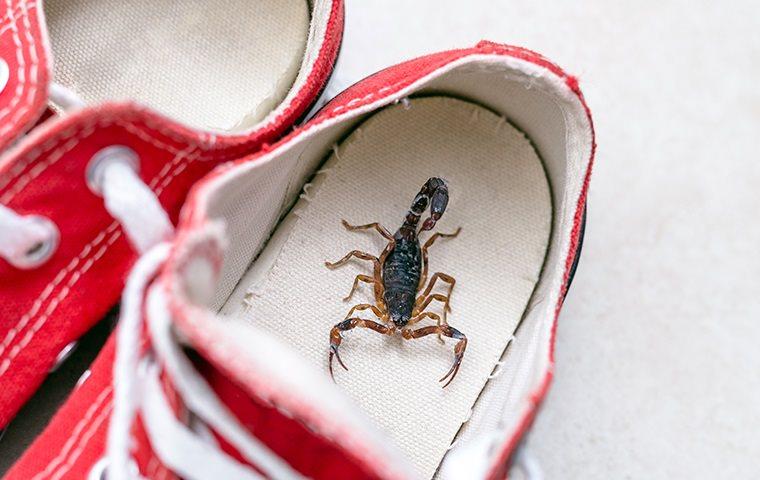 Identifying Scorpions And Their Danger

Scorpions are nocturnal arachnids who feed on a variety of insects and will even eat spiders. It is common to see scorpions in the home sheltering from heat, or chasing their prey indoors who are doing the same.

Two to four inches in length, scorpions vary in shade from yellowish-brown to tan. They have four pairs of legs in addition to an intimidating pair of pincers, and a long segmented tail holding the arachnid’s venom-filled stinger. Scorpions are found in the arid southwest and southern region of the United States. In fact, there are over 1,200 species of scorpion in the world, with 70 found in the U.S. The most common scorpion found in the Oklahoma region is the striped bark scorpion. This species may be identified by its pale yellow color and two dark stripes.

Scorpions wield their stinger to kill prey or as a defense mechanism. While the scorpions found in Oklahoma are not poisonous, their sting is annoying at best — often bringing a similar reaction in humans as with bees: irritated, red skin with localized swelling. However, scorpion stings do affect vulnerable populations at a higher rate, such as children and elderly folks.

As scorpions feed on insects and spiders, it’s also helpful to mitigate other potential pests infesting your property. It is generally good practice to reduce harborage points, seal foundation and structure cracks, replace torn screens, and practice secure food and trash storage. No matter your pest concern, Urbanex can help. Trust our expert service technicians to ease your worries, for good!

If You Have A Scorpion Problem, Don’t Worry, Read This

The most effective way to keep scorpions off your property is with on-going professional pest control assistance, such as Urbanex. We’ve been in the pest control industry for over 25 years, and our service technicians bring expert service with a smile. We put the customer’s peace of mind first, ensuring that your pest control concern is not only remedied at the time of service, but also that it doesn’t ever come back.

The future of pest control has arrived in Oklahoma City. Call Urbanex today and schedule an initial service.