Home › Blog › Are The Wolf Spiders In Oklahoma Dangerous?

Are The Wolf Spiders In Oklahoma Dangerous?

While most domestic spiders like to stay put in their webs, others prefer to go on the prowl. Big, hairy wolf spiders are some of the scariest-looking pests you can encounter. These spiders will dash out in the open in search of prey and can startle unsuspecting residents of homes and apartments. But are the wolf spiders in Oklahoma dangerous? 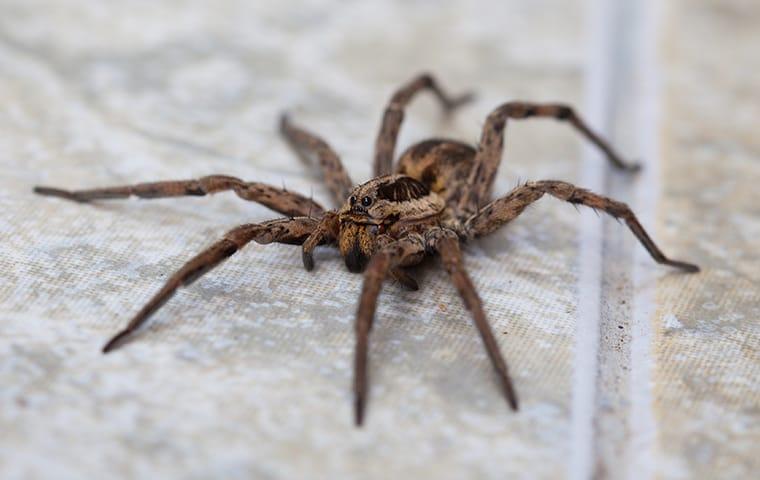 Wolf spiders are not one species in particular, but over 200 species in the family Lycosidae. These spiders have a few traits in common that make them unique among arachnids. Most notably, wolf spiders hunt their prey on the ground rather than weaving webs to trap hapless victims. Equipped with powerful fangs and explosive speed, wolf spiders live up to their name.

While certain features vary from species to species, many wolf spiders share similar physical attributes. First, they are generally larger than other spiders. An average wolf spider can measure between ½ inch to 3 inches in length. These spiders tend to be hairy and have a gray or brown color with light-colored patterns.

Wolf spiders are often spotted indoors because they must venture out and explore to find food. They can usually be spotted darting around the floor and are unlikely to hunt above ground level. Wolf spiders can be found hiding out in clutter on the floor, in closets and cupboards, and underneath furniture and heavy appliances. Entrances like windows and doors are also common sites to spot wolf spiders.

When they aren’t hunting, wolf spiders can usually be found resting in shallow burrows. While wolf spiders don’t create webs, some species produce silk used for resting and hiding.

Wolf spiders have been known to bite when provoked, however. Their venom isn’t deadly or debilitating, but their bites are painful. A bite from a wolf spider is often compared to a sting from a bee in terms of pain and can be treated with simple first aid.

Where Do Wolf Spiders Come From?

Wolf spiders prefer to hunt in the wilderness where prey is abundant. They can be found hiding among stones, woodpiles, in piles of leaves, or any other natural shelter they can find. Since they hunt their prey on foot, wolf spiders will often wander indoors accidentally in search of food or a mating partner. Sometimes, they can quite literally walk in through your front door.

If you have damaged weather stripping or door sweeps, prowling wolf spiders can easily slip through and invade your property. Cracks in the foundation and gaps around pipes can also allow easy access indoors. Should wolf spiders find a reliable food source in your home or business, they aren’t likely to leave. Wolf spiders are especially fond of venturing indoors as the weather turns cold in the fall and winter months.

Wolf spiders are an unwelcome guest in any Oklahoma home or business. But to get rid of them for good, you’ll need to get rid of the prey insects they feed on, too. That’s why you should get in touch with the experts at Urbanex. We’ll create a pest control plan customized to your needs, eliminating the problem pests you have and preventing new ones from infesting your property. With over 25 years of combined experience in the industry, you can trust our professional approach to solve your spider problems. Contact us today.